Famous Cosplayer, Enako in the cosplay costume of Noa, participated in the rehearsal premiere of the first episode of “LayereD Stories 0” which took place in Tokyo on November 18th.

Enako in the costume of cool Noa character expressed, “I have not played many cool characters so I feel nervous,” and she said that she felt great when Mitsuki Nakae (Voice Actress for Noa) told that Nakae was excited when she cosplayed the character of Noa”.

Enako’s cosplay look received a lot of appraisal, and when being asked about of her cosplay secret, Enako expressed, “Naturally, cosplay is contentment, contentment itself. It is fun to be myself”. 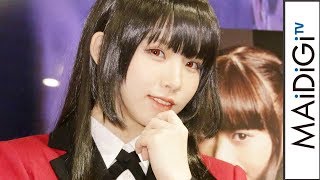